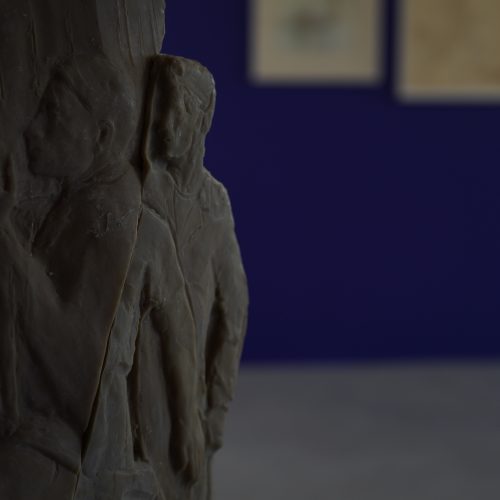 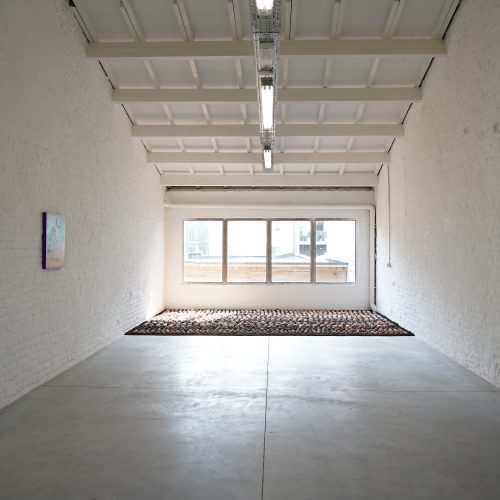 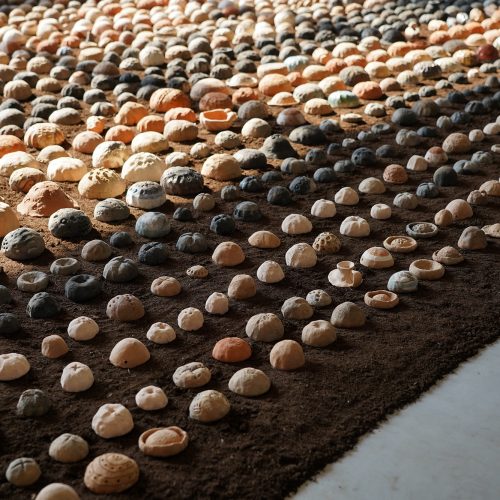 A selection by Radu Oreian

Electric Crossroads, a group exhibition by an incredible selection of Romanian artists, spanning from crucial figures of the Romanian art history to contemporary emerging artists working across a variety of media. The exhibition is intended as a multigenerational dialogue across time, geographies and art practices to promote fruitful moments of interaction between the presented bodies of work and their cultural histories.
At times of lockdown and social isolation, when we find ourselves craving for human interaction and proximity, Electric Crossroads’ goal is to represent a cultural bridge between Romanian art history and the rest of the continent’s as well as a fervid ground to develop an artistic dialogue across media: painting, drawing, installation and sculptural work engage in a curatorial assemblage of histories and cultural influences.

The powerful selection of artists has been curatorially thought through by multimedia artist Radu Oreian (b. 1984) who has envisioned a crossroad as a cultural meeting point for the artists where to establish energetic, somewhat electric connections – “a lavish intersection of matter and thought.” Such crossroads can be interpreted as connection points linking together Romanian art practices of the past with emerging ones fighting to gain recognition in a world overwhelmed by visual inputs.

Drawing from the historically renowned figures of Romanian art, an invaluable collection of artists pivot the intersection between artistic backgrounds and the intergenerational dialogue envisaged by Oreian:
~ Eugenia Pop (1945-2012), with her ceramic work of archetypal forms, abstract yet crystallising humanity and its universe.
~ Octav Grigorescu (1933-1987), abstract painter depicting invisible human bodies, drawn only by a single, feeble line of colour.
~ Paul Neagu (1938–2004), internationally recognised multimedia artist, part of the TATE permanent collection, with his visceral body of work striving to reduce the palpable tension between the desire of creation and “the systems that attempt to inhibit it”.
~ Dan Mihaltianu (b. 1954), often associated with the Land Art conceptual movement, famous for his Vodka Pool – a site-specific physical installation of a reflecting pool of alcohol that triggers a reflection around the self induced act of intoxication and the reasons behind it as well as drawing from the prohibitionist past of the Romanian Ceausescu’s dictatorship.

By juxtaposing contemporary and emerging artists to such eminent figures of Romanian art, a collision of past and present occurs, generating a fervid context for curatorial, artistic, geopolitical and national dialogues.

Within the emerging scene of Romanian art, Electric Crossroads features artworks by (in no particular order):
~ Radu Oreian (b.1984), with his artistic preoccupation that resonates with myths and stories in order to understand humanity as a whole.
~ Andreea Albani (b. 1988), abstract drawer and painter, whose conceptual body of work resembles a memory archive of psychological events, in her own words – “a visual alphabet”.
~ Ioana Batranu (b. 1960), mainly oil painter, observing ancient sacred contexts to elevate them to allegories of our present life.
~ Norbert Filep (b. 1990), painter from the “School of Cluj”, with his figuratively evocative paintings yet monochromatic, to the point of seemingly engaging with the apparent death of painting.
~ Razvan Boar (b. 1982), reflecting on today’s means of communication through his mural works that resemble collages of visual inputs embedded in a contemporary political and national memory.
~ Flaviu Cacoveanu (b. 1989), working at the intersection of art and visual communication, his light-based work – 2020 – draws on the recently elapsed pandemic year, still so contemporary and yet a disastrous past we all try to forget. Reflecting on himself and his surroundings, Cacoveanu questions the role of the artist and the power of the artistic message.
~ Ioan Grosu (b. 1985) contrarily distances himself and his art practice from the digital era he belongs to, mainly creating oil paintings that require incredibly long production times and draw upon the Romanian art masters.
~ Nona Inescu (b. 1991), one of the youngest artists in this exhibition, elevates touch to the core sense that should guide the human experience of the world. Working across a variety of media, Inescu describes her practice as “a hand with five fingers, each finger representing a medium I choose to work in: photography, sculpture, objects, installations and video works.”
~ Mircea Cantor (b. 1977) establishes bridges with the memory of his childhood, influenced by growing up in a Communist country. Cantor is interested in social differences and the concept of borders and these aspects are clearly visible in his poetic video work and installations.
~ Ioana Stanca (b. 1987) with her diverse approach, sees the canvas as both the platform and the core material of her work. By cutting and sewing strips of canvas and recycled materials, the artist subverses the logic of the contemporary beauty industry leveraging on humans’ poor self-confidence.
~ Serban Savu (b. 1978), praised for his photo-realistic paintings, depicting scenes of mundane real life, from graffiti artists, prostitutes to families at the park.
~ Mi Kafchin (b. 1986) touches on themes of transformation, a sort of visual magical realism referring to time, Eastern philosophy and cosmology.
~ Ciprian Muresan (b. 1977), multimedia artist, with his allegorical body of work ponders on post-Soviet life and the decadent conditions of particular social classes. His work is symbolic, yet politically linked to a shared national history.
~ Ioana Sisea (b. 1988) deploys a variety of media and defines herself as “medium agnostic”, adopting whatever mode of expression best recalls memories of her family and past relationships. She also addresses themes connected to the social perception of the body and the inevitable judgment that comes with it.
~ Nicolae Romanitan (b. 1991), the second youngest artist featured in this exhibition, is somewhat obsessed with video game references that are easily graspable and at the same cleverly hidden in his graphic and photographic work through which he is able to unveil some of the brutal aspects of life: violence, grief, sex, murder, hunger, torture…

After having touched on each exhibited artist, consciously briefly, Electric Crossroads invites the viewer to experience a platform for dialogue, where Romanian cultural identity is investigated and questioned, asking to be translated, readapted, through the means of art, with the aim of revealing novel insights into what being a locally rooted as well trans-national artist truly means today.