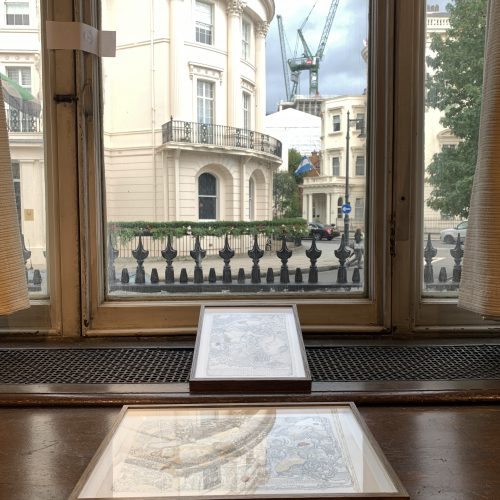 In the lead of the London solo show of Romanian painter, Radu Oreian (1984), Gallery Nosco is pleased to announced an introductive evening at the Romanian Cultural Institute.

Following his successful 2017 exhibition in Marseille, accomplished Romanian artist Radu Oreian arrives on Britain’s thriving art week in two special events celebrating his first solo show in London, entitled ‘Microscripts and Melted Matters’ .Open at a central London Fitzrovia location in collaboration with Gallery Nosco, the show is preceded by an exclusive preview at 1 Belgrave Square, in the presence of the artist and his gallerist.
‘Microscripts and Melted Matters’ brings together large-scale paintings and drawings, as well as smaller-scale works that draw upon ancient painting techniques, sacred scriptures, medieval legends and contemporary narratives. The artworks puzzle the viewer with a new visual imprint of a peculiar density that appears to exist in a pulsing state of tension and relaxation. Oreian achieves this density by interweaving human thoughts and fragmented corporeality through the depiction of chaos and order that he manages to synchronize, and finally by collating figuration and abstraction that leads to the creation of something beautifully organic and compressed.
The central painting on display in RCI’s Brâncuși Gallery is a massive canvas covered in an organic matter that resembles the pattern of minced meat, thus bringing the body into central focus and creating a collective portrait of humanity. The work intends to have the role of a fender, a screen floating in space that depicts the role of the individual in the hyperconnected reality of the 21st century. A series of miniature portrait paintings will be presented alongside ‘Collective Portrait under a Palm Tree’.
Radu Oreian (b. 1984) is one of Romania’s most inspiring contemporary artists belonging to the younger generation. A graduate of the National University of Arts in Bucharest and of the University of Art and Design in Cluj-Napoca, he uses drawing, painting and installation in his practice. The concept of ‘collective portraits’ that constitute the main body of Oreian’s work is placed at the intersection of art, philosophy, language, history and the ever-evolving form of complexity that society generates today. Among his most notable solo shows are those hosted by Gallery Nosco in Marseille (2017), Meet Factory in Prague (2016) and Kreuzberg Pavillon in Berlin (2013), as well as the ‘Farewell to the Thinker of Thoughts’ exhibition in Mumbai (2018). During the past thirteen years, Radu Oreian has also been a part of group exhibitions in Europe and South America, and he was artist in residence at Gallery Nosco in Marseille (2017) and Meet Factory in Prague (2016).