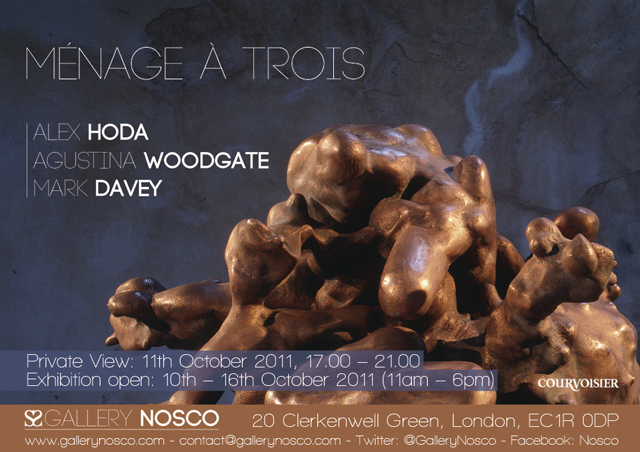 Ménage à Trois brings together three artists of varying mediums and explores the affinities between their sculptural works presented here.

The works of Augstina Woodgate are making their debut appearance in the UK in the exhibition Ménage à Trois. In Woodgate’s piece “Waterfalling” a hanging chandelier holds thousands of clear strands of water falling over the grounds. Instead of order emerging from the chaos, chaos emerges from the order. Woodgate aims to foster exchanges between people, opposing ideas of individual viewer and object; the moment of art arising from the exchange occurring at the collective viewing. She explores the physical, emotional and cultural relationships we have with our surroundings.

Alex Hoda is a British artist who lives and works in London (b.1980 Canterbury) He graduated from The Royal Academy in 2008.

Hoda says of his work “I’ve always found the process of suckling fascinating. There’s something sexual about passing fluids between human beings. The animals in my work enable me to explore these sexual links with the mother without being literal.

I see my sculptures as allowing for alternatives.

I identify with all sculpture primarily because sculptures are objects with the same sort of mass as us. Sculpture is very in your face, and that’s what draws me to it. “

Mark Davey is a young British artist who lives and works in London  (b. 1985 Bristol) He has graduated from The Royal College of Art, and Slade School of Fine Art.

“Using lights as physical components, I aim to show off their properties by making them seductively, erotically, perversely kiss and touch; by moving, by swinging or rubbing themselves over other materials.

I want the work to be almost hypnotizing whilst at the same time serving to remind the viewer about their own sexuality, perhaps enticing feelings of unease and suspense as they see the bulb gently caress (or fuck?) “

She says of her work “My works explore and engage with multilayered surfaces and workings of the built environment and navigates the intangible and transient layers of physical and psychological space.”