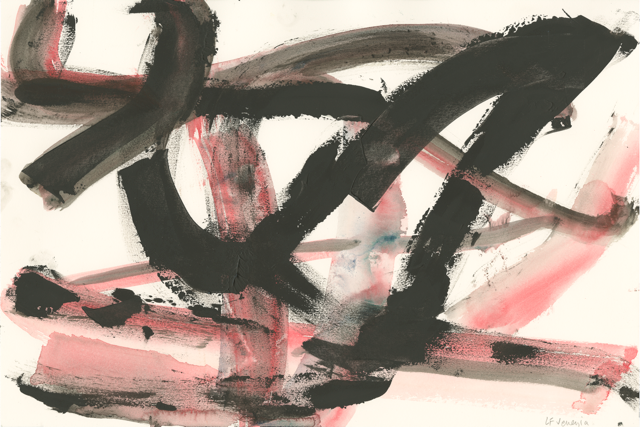 A fully illustrated catalogue will be published to accompany the exhibition.

We are pleased to announce an exhibition of watercolours by New York abstract painter Louise Fishman. This is the artist’s first solo exhibition in the UK, uniting works created during the artist’s residency at the Emily Harvey Foundation in Venice, Italy.

While living in Venice, Fishman plunged into an exhilarating exploration of watercolour as a medium. Profoundly inspired by the ebb and flow of the surroundings, Fishman took thousands of photographs, working vigorously between a stream of open drawings. The residency in Venice marked a dynamic shift in the artist’s creative process, and the fruit of Fishman’s two trips to the city is a phenomenal body of watercolours and sketchbooks from the artist’s private collection, to be shown in London for the very first time this December.

The resulting compositions resonate with the theatricality and drama of an Italian opera, while evoking the lightweight atmosphere of Venice; the luminosity and color of its sky, water and glass. Fishman’s signature formal elements — calligraphy, gesture and grid — find a new light amongst found papers, bleeds, scratches, drips, erasures, fingerprints and other physical interventions. A myriad of influences reveal themselves, from the artist’s life-long admiration of Titian and Tintoretto, to later influences by Giorgione and Veronese.

Born in Philadelphia, Pennsylvania in 1939, Fishman’s works are deeply impacted by cultural, political and emotional experiences. Over the past five decades, Fishman has re-invented and expanded approaches to abstract painting, and continues to reframe conventions through various formal and material investigations. In her own words, Fishman is examining our histories and moving forward, just making the best paintings I can make, that’s what I do. That, and being in love.

One of the last direct descendents from a great lineage of American abstract painters (Franz Kline, Willem De Kooning, Joan Mitchell) Fishman – who first exhibited in 1963, is the subject of two comprehensive retrospectives scheduled for 2016, at the Neuberger Museum of Art in Purchase, New York (April 3rd – July 21st, 2016) and The ICA (Institute of Contemporary Art) at the University of Pennsylvania (April 20 – August 16, 2016).