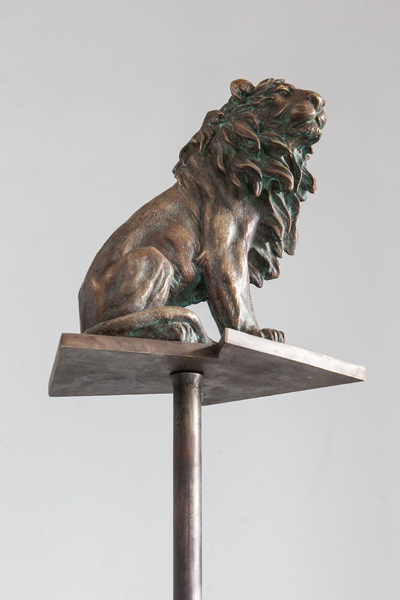 “We Promise to Never Wake Up”: Still Life

‘At a time when voices are heard from the philosophy announcing the death of representative democracy, the  Martinat Mendoza brothers, José Luis and José Carlos b.Lima, 1974 (Tate Modern-London, Sharjah Museum-UEA, Perez Museum-Miami, Göteborg Museum-Sweden, MoMa-New-York…), have created bronzes that evoke this possible change of paradigm.

Sculptures made with symbols from parties, both Left and Right, of the 20th and the beginning of the 21st century, when the market, survival and corruption show the failure of utopian political visions.

Political marketing has stormed the mass media to sell us beautiful ideals, a faith of change and a messiah that will guide us to the promised land at the low cost of one vote: mark a symbol.

“We Promise to Never Wake Up”: Still Life uses repeated iconography as prayers, graphic manipulation perpetuated in bronze, like objects of an extinct pagan cult, that will have to be found at some point in the future when we have, I hope, a more fraternal way of relating to each other.

Meanwhile, these pieces are a forecast of a possible change in our way of understanding politics, a powerful omen’.